"Poison of Snake"
Zylom is an exclusive boss from Life Force (Arcade), appearing in Stage 2.

Given that Zylom is an edit of Tetran, it uses the same attack pattern of the original, spinning it's four arms and circling around the arena. 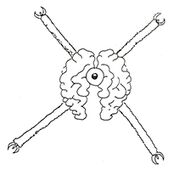