Zelos Force is a boss that occasionally appears in the Gradius series. It first appeared in Salamander as the core of the Salamander Planetoid. It always appears as a giant red eyeball and was also created by the Bacterians as a planet-modifying system to change planet Latis into an organic fortress for them. Since it is an organic weapon and also a living creature, some Zelos Forces are seen in different situations they normally would be in, such as manipulating a core unit, transforming into another creature, or living in wild.

While originally appearing as a non-combatant final boss, in a few games Zelos gained additional attacks:

The Zelos Force appears in the first episode of the Salamander anime series. It serves as the core of the Salamander, which the heroes attempt to destroy. Much like in the original game, it never attacks, although it is protected by an exceptionally strong version of the Intruder. 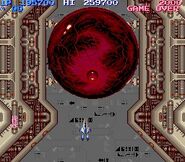 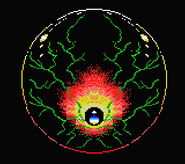 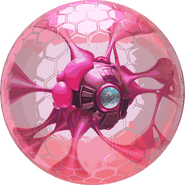 Zelos Force in the Salamander anime

Zelos Force in the Salamander anime 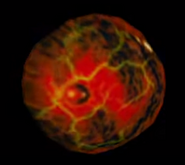 Zelos Force as seen in Gradius IV, after defeating Berial.