Theme of Yoshiwara Dayuu
(The Storm by Gioacchino Rossini)

According to the game's manual she is the ghost of a courtesan/prostitute.

This boss first shows up as a cloud of gas which moves fast and tracks the player's movements. After a while, the cloud move to the right of the screen and reform into the boss proper, which will then float around while summoning lots of Human Souls. Her weak point is the orange orb in front of her. 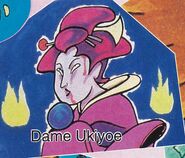 Add a photo to this gallery
Retrieved from "https://gradius.fandom.com/wiki/Yoshiwara_Dayuu?oldid=28249"
Community content is available under CC-BY-SA unless otherwise noted.