Yoshiko (よしこ, Yoshiko?) is a recurring boss in the Parodius series.

She appears as a giant female moai head wearing makeup. She also is a boss in the stage 4 of Otomedius Gorgeous exclusively acquired through downloadable content.

Those who are lucky to avoid the Moai Battleship, you are treated with Yoshiko. Stay to the far left, aiming and shooting at her eye. She attacks by shooting out Yoshios, horizontal moai shaped like homing missiles. After every few of these, she shoots out a long one, that can be avoided by going the opposite way she isn't going. Keep shooting her in the eye.

Yoshiko is the Empress of Easter Island, a weird society of sentient Moai statues. The Gofer Sisters only tend to go to Yoshiko when they want a distraction. The alliance is tentative, and seems to be based entirely on centuries of the Moai being used by Bacterians as weapons emplacements. 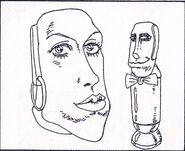 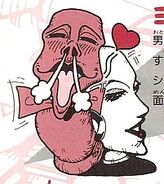 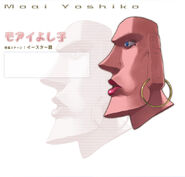 Yoshiko as seen on Gokujou Parodius
Community content is available under CC-BY-SA unless otherwise noted.
Advertisement