Adopts four different forms, each with its own offensive set

As with the mythical Chimera beast, it has three heads. It can morph into four different forms, the second form being based off which head is dealt more damage. Upon defeat of each form, it converts into the same gooey substance previously found throughout the stage. As it dies, it makes one final roar and dissipates. 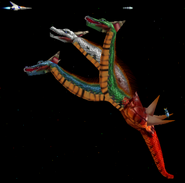 Each head fires in either spreads or single fireballs. The fireballs can be destroyed.

Its weak points are the heads.

The easiest of the three forms. The turtle heads occasionally fire lasers from their mouths and the whole monster launches spores from its back. The spores can be destroyed by the turtle's beams or by the player - the former causing them to explode in a six way spread. They can also explode by themselves.

Its weak points are the heads.

The hardest form to trigger (due to the blue head being the middle head). This form is predictable. Its three eyes can fire slow moving and destructible projectiles, and can occasionally try to grab you.

Its weak points are the eyes. 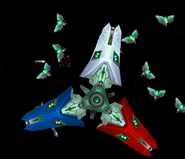 Its weak points are the wings.