Xaerous, also sometimes referred as Zelos (not to be confused with the giant red eyeball of the same name), is the first fortress of the Bacterians. It was powered by the Xaerous Brain. 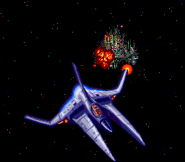 Zelos in the Salamander anime

Add a photo to this gallery
Retrieved from "https://gradius.fandom.com/wiki/Xaerous_Fortress?oldid=19277"
Community content is available under CC-BY-SA unless otherwise noted.