The Wreek is an extinct ethnic group that appeared in the Gradius and Nemesis series.

The Wreek was one of the native ethnic groups which inhabited Planet Gradius, and the only group to live on the planet's southern hemisphere. Descending from the same ancestors of the Ancient Latis Civilization, the Wreek possessed a psychic power that came to be known as the "Wreek Power", which could be harnessed as an energy source.

The Wreek Power was maintained by a strong magnetic ion held inside their bodies, thus making them susceptible to a variety of cosmic rays which exist in nature. Because of this, the Wreek were forced to settle on Gradius's southern hemisphere, where the incidence of cosmic rays was relatively low, living a simple and primitive lifestyle.

For a long time, the Wreek remained isolated from the rest of the planet due to the Imperial Government refusing their recognition. However, during the Northern Cross War, a vast amount of cosmic radiation rained down upon Gradius and this had a huge impact on the Wreek, with most of them perishing as a result. After the end of the war, only twelve Wreeks remained, with four more dying due to the Empire's negligence. With time, the tensions would only grow worse between the Wreek and the Empire. The remaining Wreek survivors, led by Dr. Venom, would come to join the Gradius Space Agency. After the Empire received a report informing them of the existence of the Wreek Power, they finally decided on recognizing the Wreek and launched a protection policy on their behalf. However, this would do little to lower the tensions.

After the sunspot of the sun disappeared, the Imperial government hastened the protection policy and the implementation of the Wreek Power as a new energy source. The newly-developed Wreek Power engine would be employed on the new spatiotemporal fighter Vic Viper, which was employed during the First Bacterian War.

After the war ended, Venom attempted a coup against the Empire along with his fellow Wreek aides, but failed and was exiled to the prison planet Sard. After escaping and aligning himself with the Bacterians, he launched a full-scale attack against Gradius, only to be stopped by James Burton, another Wreek. After the war against Venom ended, James would be the only surviving Wreek left. As such, his eventual death would mark the extinction of the Wreek, although James would leave descendants which inherited his Wreek powers. 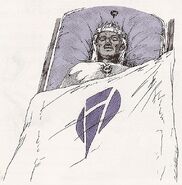