Viva Core (ビバコア, Biba Koa?) is the boss of stage 6 in Parodius Da!

Viva Core is yet another variant of Big Core MK I, this time taking on a more humorous tone in Parodius Da!. Viva Core is loaded with neon lights and the traditional blue core has been replaced with a pinball bumper reading "10000 PTS". On the rear, "VIVA CORE" can be clearly seen in bright neon red. It does have extra armaments such as waving arms that shoot big destructible balls and also has flippers that somewhat protect the core.

Viva Core attacks very much like Big Core MK I with the addition of the destroyable balls fired by the moving arms. The flippers open and close and provide some protection to Viva Core, but it's still easy to beat. 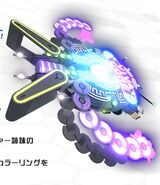 Retrieved from "https://gradius.fandom.com/wiki/Viva_Core?oldid=28215"
Community content is available under CC-BY-SA unless otherwise noted.