For other uses, see Venom (disambiguation).

Dr. Venom (ヴエノム博士, Vuenomu Hakase?) is the main antagonist of Nemesis 2 and Nemesis 3. He was once the Director General of the Space Science Agency and was the head creator of the Vic Viper. He later developed the Metalion.

Venom belongs to a primitive race known as the Wreeks. The Wreeks had extraordinary powers which could be used as energy, but they were very vulnerable to radioactivity from space. The Northern Cross War caused wreckage to fall on the surface of Gradius, and the radioactivity was high enough to kill any of the Wreek. Only few of them survived, and James Burton and Venom were among these survivors. The Gradian government didn't do much for the Wreek and only tried to use their special powers, otherwise avoiding contact with them since they were a primitive species.

Venom was greatly angered by this and his deep hatred toward Gradius began. His hate eventually lead him to plan a coup d'état with his companions, some of whom were a few survivors of the Wreek. In the year 6664, he was arrested for this failed attempt, and also for conducting dangerous and illegal experiments. For this, he was exiled to the prisoner's planet, Sard, to spend the rest of his life. During his exile, he managed to contact the Bacterions, and with their assistance created a massive fleet and began to attack other systems in the galaxy.

In 6665, he escaped from Sard and invaded Gradius and the surrounding seven planets. The response was to send Special Colonel James Burton using the hyperspace fighter Metalion, an upgrade from the Vic Viper, to stop Venom before he conquered Gradius.

In 6666, Venom and his Bacterion allies were defeated, although he was not killed in the attack. He was reincarnated inside Zelos and lead the revived "Salamander" attack force in Salamander MSX, but was again defeated. For the next 200 years, he rebuilt his forces and set out on a new plan to conquer Gradius.

In roughly 6866, Venom once again began his attack. But this time he was setting his sights on James Burton in the past, as he had died in 6718. If he succeeded, then there would be no pilots capable of stopping his assault and he would take over Gradius. David Burton, who was a direct descendant of James, was sent using the new Vixen line of fighters to stop Venom. David eventually went into the past and stopped Venom's plan. However, in a last ditch effort, Venom attacked David when he returned to the present. Fortunately, his assault did nothing as David had found a powerful force field and activated it at the last moment.

The last boss of Gradius V claims that it was once called "Venom". Whether this boss is the future form of Dr. Venom is unknown, at least officially. It may be possible that the boss was a part of Venom after he was destroyed at a certain year between Gradius IV and Gradius V.

Cameos in other Konami titles 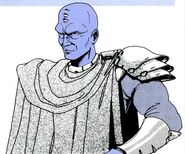 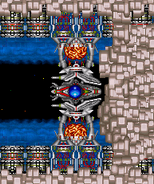 "I am just a small part of what was once known as Venom. Pieces of me are scattered throughout the cosmos. Eventually, another will become sentient and exact retribution. You will never escape the shadow of fear! My hatred your kind is eternal." 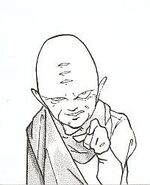 Venom in Hai no Majutsushi