Upa (ウパ, Upa?) is a fictional baby character created by Konami in 1988 for the Famicom Disk System game Bio Miracle Bokutte Upa. He has not been released in a game outside of Japan other than the pirated game Mario Baby, which was identical to Bio Miracle but with an altered title screen.

Upa crawls around armed with a magic rattle. When an enemy is struck with this rattle weapon, it inflates like a balloon and slowly floats away to the top of the screen. When inflated, enemies can then be used as temporary floating platforms to climb to higher places or used as weapons if they are pushed. He can also become temporarily invincible and gain the ability to walk if he obtains a special power-up.

In Wai Wai World 2: SOS!! Parsley Castle, Upa is a possible playable character whose rattle functions somewhat differently than in Bio Miracle. When Upa hits an enemy with a rattle, instead of inflating, it simply turns into a cloud which floats upward and he can use it as a platform. This time around, he can't push it and use it as a weapon. There are also special bonus blocks for Upa in two stages that are based on Bio Miracle Bokutte Upa.

In the Mobile Version of Wai Wai World, Michael Walsh from Goonies was replaced by Upa and a Candy Stage.

Upa in the Parodius series

Upa, along with a new female counterpart named Rupa (ルパ, Rupa?) (presumably his twin sister), appear in the Super Famicom version of Gokujō Parodius! and Jikkyō Oshaberi Parodius. They both have similar, but somewhat different weapon configurations, both of which are based on the weaponset from the Raiden series. The first level music from Bio Miracle is played at the beginning of each stage if the player is using Upa or Rupa. 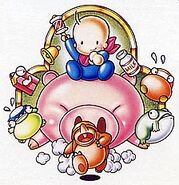 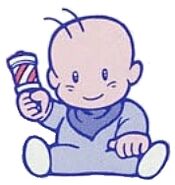 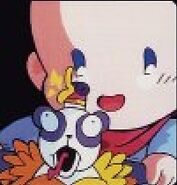 Upa in the Super Famicom version

Upa in the PlayStation version

Rupa in the Super Famicom version

Rupa in the PlayStation version
Add a photo to this gallery
Retrieved from "https://gradius.fandom.com/wiki/Upa_and_Rupa?oldid=28135"
Community content is available under CC-BY-SA unless otherwise noted.