Ug (ウグ, Ugu?) is one of the enemy introduced in Salamander, stage 4, Volcano Area.

They are unique in that they are launched from Hatches far down below where the Vic Viper is, but quickly fly to your altitude, before doing a kamikaze attack right into the Vic Viper. An upgraded version, called Ug Mark II, has also been introduced in the same game.

Ugs rise from the background hatches and then flies at you. Ug Mark II has a quicker version of the attack patterns of the original. 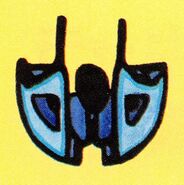 Ug Mark II (Salamander)
Add a photo to this gallery
Retrieved from "https://gradius.fandom.com/wiki/Ug?oldid=29487"
Community content is available under CC-BY-SA unless otherwise noted.