TwinBee (ツインビー, TsuinBī?) is one of the main fighters that first appeared in the TwinBee series, then on the MSX version of Gradius via a secret trick and then later in the Parodius series. His weapon set is based on his own games, consisting of bell powers of TwinBee fame being translated into Gradius weaponry.

TwinBee joined Tako's Star Fighter team in Parodius Da! to help him defeat Tako's father Golgotha Takobee. TwinBee was made look like his "female" counterpart WinBee from the original TwinBee for arcades: this has been due the TwinBee's design not being so known before he got his modern appearance in Detana!! TwinBee. After then, TwinBee was included in two more Parodius games, joined by WinBee. Both were replaced by Ace in Sexy Parodius.

According to Parodius Da!, TwinBee is 17 years old.

Description: TwinBee's strongest weapon. TwinBee launches his rocket gloves (or earlier in Parodius Da!, hands) forward so far to hit the other side of the screen: after then they return back at him. This can go through weak enemies, and if hit walls or damaging a strong enemy, they burst into nothing. Rocket Punch has much more impact area than usual missiles, but might be hard to use against ground enemies.

Origin: In most TwinBee games, when TwinBee's hand would be hit, he would lose it. Losing both hands again made him unable to launch down any bombs. To prevent this, an ambulance would be called to repair TwinBee and give him new pair of hands.

In Parodius Da!, when TwinBee uses Rocket Punch, he would launch his hands off, much to refer to his games where his hands were detachable and vulnerable. Punching would become his one of the staple moves he would use in later games in his series, like Pop'n TwinBee and it's spinoff, Pop'n TwinBee: Rainbow Bell Adventures. Starting from the last regular TwinBee game, TwinBee Yahho!, one of the chargeable moves you can choose in the game are red punching gloves, which let TwinBee launch flurry of punches at his enemies.

TwinBee would also appear as a playable character in DreamMix TV: World Fighters, a massive crossover fighting game developed by Hudson, Konami and Takara. One of TwinBee's standard attacks is Rocket Punch, which lets him launch off his hands in a similar fashion to Parodius games. The gloves were kept white, though.

In Otomedius, Madoka's default missile is the Rocket Punch, which behaves the same way, expect slower.

Description: Exactly the same tail gun from Gradius II: a regular shot is given a second bullet which is fired out the tail of the ship instead.

Origin: While it seems to omit the Twin Cannon from the TwinBee series, it might have been opted to give TwinBee more defense behind.

Description: TwinBee's cannon is upgraded by giving his usual shot two more bullets that fire 45 degrees diagonally, one up and one down.

Origin: 3-Way was originally acquired from a minibell, an uncommon power-up found by bombing certain amount of enemies succession (such as eight in the original TwinBee. Depending on the game, TwinBee would acquire it by using bells as well.

Description: This option will act exactly like the Funshin options from the TwinBee series, which retracts to your main fighter's position when you stop the movement, making it less useful than normal option. Additionally, you can just equip three of them.

When used by WinBee in Jikkyō Oshaberi Parodius, these don't retract, instead they act like the usual Shadow Options. This is intentional, though; in Pop'n TwinBee, WinBee's Funshin don't retract in that game. It's quite a difference.

Origin:Throughout TwinBee games, when TwinBee would acquire a Green Bell, he would be given three shadowy offshoots that were attached at him. These could imitate TwinBee's movements and gave him extra firepower and even mimic the upgraded weapons from him, depending on the game. These also could attack the ground enemies with bombs, but when the arms of the player are blown off, the offshoots lose their arms also.

In early TwinBee games, the Funshin power would give out transparent versions of TwinBee: this is used as their design in Parodius Da!. Starting from Pop'n TwinBee, the Funshin would become smaller solid copy's of TwinBee, a design to be used for the rest of the Parodius games. Their design were borrowed from the Shippo Barrier power-up from Detana!! TwinBee, which came year before Pop'n TwinBee.

Description: A circular huge barrier is attached to your ship. When you are hit several times by bullets or collisions, the Barrier gets smaller until it's lost. In Jikkyō Oshaberi Parodius, this would become Barrier, a bubble-like shield covering TwinBee entirely, and acting like Force Field from Gradius II.

Origin: When TwinBee would acquire a Red Bell in the TwinBee series, he would be given a Field Barrier, usually called as Barrier. In most TwinBee games this was a circular force field, which would protect him from bullets or collisions between walls. The radius of Field Barrier was quite large, making the powerup somewhat easy to be depleted, despite it being able to absorb five hits. This kind of barrier was used in Parodius Da! and Gokujō Parodius!

In Pop'n TwinBee, the Field Barrier was improved by reducing the radius and making it an orb that covered TwinBee entirely.The Barrier though was now slightly weaker since it could now take four hits, but it made up for it by being not so likely to be gone fast due to it's small size. This kind of barrier would be used again in TwinBee Yahho!, which gave Barrier a more bubble-like appearance but was again made weaker by depleting off after three hits: In Jikkyō Oshaberi Parodius, TwinBee would replace the Field Barrier with Barrier from TwinBee Yahho!

When used by WinBee in Jikkyō Oshaberi Parodius, these instead give out Shippo Barrier, which upgrades her Funshin into an invisible shield. These can take any bullet and attack without damage, and never seem to run out their invulnerability, so try your best to avoid things which might strip your shield off (like different-colored bells).

Shippo Barrier's origin is from Detana!! TwinBee's purple bell power, which gave the same power in the same manner as the green bell. It is much harder to use, though, since TwinBee had to move all about to make the barriers cover him successfully. 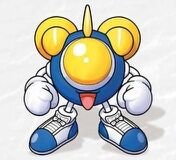 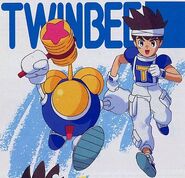 TwinBee and his pilot Light 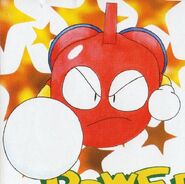 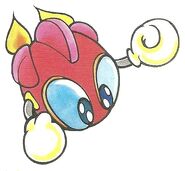 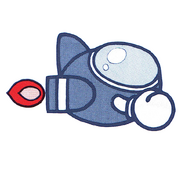 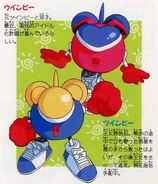 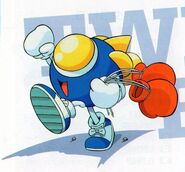 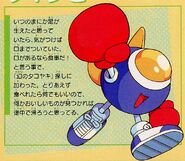