The first thing this boss does is to try and collapse the room on you, so hang out around the middle of the screen when it stops scrolling. Once the orbs appear and the eyes start flashing, the fight has begun for real. Dodge up and down to avoid the shots from the boss and try to hit its eyes. The orbs will frequently block your shots, so this can take a while. Sometimes he will try to ram you slowly.

His original weakness no longer applies in Solar Assault, due to his moai-like redesign. Instead, you must shoot his mouth when he's attacking. 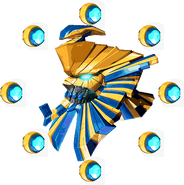