He is a gigantic ghost with a drawn face and hangs from a strand of rope. Although he can be damaged by being shot anywhere, his main weakpoint is the rope he is hanging from. He'll fall once it breaks.

Tenuki Buzz will attack by releasing small ghostly versions of himself which will continue to chase the player until killed. The player has to take care of the ghosts as they will swarm if there is a lot of them. 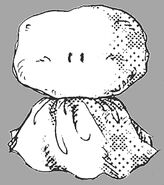 Kotenukis
Add a photo to this gallery

Retrieved from "https://gradius.fandom.com/wiki/Tenuki_Tenuki_Buzz?oldid=27498"
Community content is available under CC-BY-SA unless otherwise noted.