"Theme of a Mechanical Body"

Tenny Rop is the boss of the stage 4, Huge Battleship. It is the Salamander 2 version of Tetran. It only has a few differences from the original and it is notable for being Salamander 2's only Core Warship. It has three barriers on both sides.

The arms can be rather hard to dodge, but usually do not cause trouble. The real difficulty of the battle comes from two things:

As Tenny Rop's barrier rotates, it is best to get between two arms so the core may be shot. Note that Tenny Rop will continue moving no matter what you do, so you must watch for that. If you're feeling suicidal, then kill yourself and quickly move inside Tenny Rop's core. If you tap fast enough, you can kill it before your invincibility wears off. 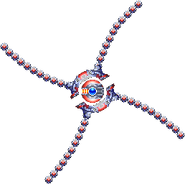