Parodius Da! (as an Option)

Takosuke first appeared in Parodius Da! as his father Tako's first Option, and as a playable character in Gokujō Parodius!, taking his father's place. Appearing alongside him is Belial, a female yellow octopus and a childhood friend. Unlike his father in the MSX game, Takosuke uses the Salamander weapon set, as opposed to the traditional Gradius weapon set. His younger brother, Takohiko, takes Takosuke's place in Jikkyō Oshaberi Parodius, who also gets accompanied by Belial.

In Gokujō Parodius!, Takosuke assembles the "Parodius Team" to search for a legendary treasure known as the "Glory of the Past". In Sexy Parodius, the now older Takosuke opens an agency that helps clients with problems (that the player has to fix) and hires Pentaro as his secretary. At the end of the game, however, he turns coat and steals the profits of this agency and is apparently killed by the games' final boss, Kaori.

Takosuke also appears on the Parodius pachinko game CR Parodius Da! EX, with his latest appearance in Gokuraku Parodius!, where he can bee seen peeking at Hikaru on the beach and eventually has a baseball match with her. He also shows up in his "Old Lecher" appearance, where he takes out the cartridge from the console, blows at it and puts the game back with his tentacles. 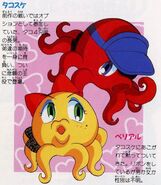 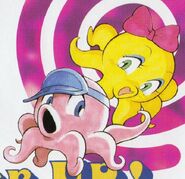 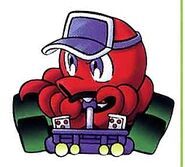 Takosuke in Gokuraku Parodius!
Add a photo to this gallery

Retrieved from "https://gradius.fandom.com/wiki/Takosuke?oldid=29669"
Community content is available under CC-BY-SA unless otherwise noted.