She is a large, sexy, pink octopus wearing a tiara that's adorned with jewels, having a veil draped over one of her tentacles with lipstick on it imitating a mouth and has cartoonish green eyes.

Like many final bosses of the Gradius series, she does nothing but sit there and be worshipped by penguins. She has no defense other than a poofy pink fan, but even then you can shoot below or above the fan as she can be shot anywhere on her body. When defeated, she will shout out and turn blue. During the after cutscene, you can see her tentacle in the background coming out of the entryway with a bandage on it. 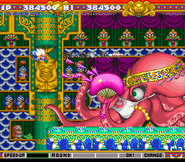 As she appears in Gokujō Parodius!
Add a photo to this gallery

Retrieved from "https://gradius.fandom.com/wiki/Tako%27s_Cutie?oldid=28582"
Community content is available under CC-BY-SA unless otherwise noted.