Sue and Memim are playable characters introduced in Jikkyō Oshaberi Parodius. They are two faerie girls, based on the faeries which appear as secret items in the previous game. They act as replacements for Hikaru and Akane, who have become bosses in the game. Both would return later on in the Parodius pachislot games.

While Sue is only 12 years old, Memim is 741 years old (the fairies are said to live for about 2000 years). Memim have been searching the rumors of the legendary Phantom Takoyaki for ages with no success, until Sue hears about it from Vic Viper, who owns a tire shop of which she's a regular customer. The two fairies then decide to join together to search for it. 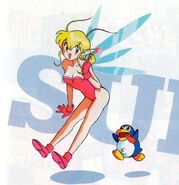 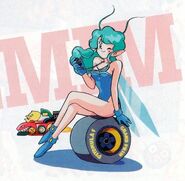 Memim
Add a photo to this gallery

Memim in the Super Famicom version

Memim in the PlayStation version
Add a photo to this gallery
Retrieved from "https://gradius.fandom.com/wiki/Sue_and_Memim?oldid=27556"
Community content is available under CC-BY-SA unless otherwise noted.