Strarf is one of the stolen Bacterian member along with Arnval, an energetic and cheerful android that has a great responsibilities for Arnval and her skill to be a deadly warrior like the Bacterian enemies to pretend to be an squadron even the girls.

Her Riding Viper is the Alpinia from Solar Assault with the elements of an MMS Type Demon / 02 and a T-301 Vic Viper customization.

She is voiced by Minori Chihara.

Strarf pilots the Alpinia from Solar Assault as her Riding Viper. She is a character best suited for advanced players because of her eight-slot power bar and the nature of her default weapon set, especially her exclusive weapons. The Armor Piercing laser weapon is quite powerful but it has a problematic shot delay. The Freeway weapon fires like a normal double when stationary, and when moving it fires in the same direction that you move. The Psycom Laser is a pair of laser beams that fire from the ship only and track to the nearest enemy. That sounds good until a situation comes where, say, a missile takes out the intended target first, in which case this weapon is known to get stuck in a loop, circling about until something else crosses its path to make it stop. That also means that only one shot can be fired at a time (at Level 1 only?). Its power is decent, but overall, it's a tough weapon to effectively use. The Mind Blast weapon fires normal shots in all four diagonals from both the ship and from the options.

Speaking of which, Strarf only gets two Options, but they are unique. These Variable Options resemble the old-fashioned Force Field from the first two Gradius games, which has now become known as the Shield. These options will move around the top and bottom of the ship to the back or to the front as the ships forward or backward specifically (it's a mirrored effect; move the ship forward to move the options back, and move the ship back to move the options to the front). Pressing the fire button holds the options in place at their respective positions and firing angles. This takes some time to get used to it, but it allows you to attack in unique ways that no other character can replicate. Strarf's Platonic Break is the Psycom Missile attack, which fires six powerful homing missiles that look like blades. 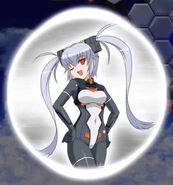 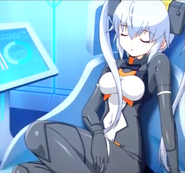 Retrieved from "https://gradius.fandom.com/wiki/Strarf?oldid=30937"
Community content is available under CC-BY-SA unless otherwise noted.