The Sharp Cross (シャープクロス, Shāpu Kurosu?) is an enemy in Salamander and Salamander 2.

The Sharp Cross is an indestructible enemy that acts more as an environmental obstacle. It makes its first appearance in the first stage of Salamander, Bionic Germ. It is a large fang-like appendage that juts in and out from the lining of certain tissue that's meant to help aid the process of digestion by grinding larger particles of food into smaller pieces, like teeth.

They are unintelligent and move at a constant rate, generally up and down, but they are large and create quite difficult navigational situations for the Vic Viper. They can't be destroyed or stopped, and instead should be avoided.

The Sharp Cross also appears in the Salamander anime series. 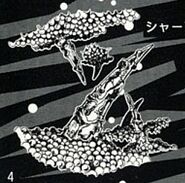 Sharp Cross in the Salamander anime

Crab leg
Add a photo to this gallery
Retrieved from "https://gradius.fandom.com/wiki/Sharp_Cross?oldid=29475"
Community content is available under CC-BY-SA unless otherwise noted.