For other uses, see Salamander (disambiguation).

Salamander is an artificial planet and final stage in Salamander and Life Force (where it is referred to as the "Brain Area"). It is the base of the namesake attack force, and is also home of Zelos Force who is the core of this base.

In Life Force, despite being referred to as the "Brain Area", its appearance is largely left unchanged, still resembling a mechanical base. The final boss, Zelos Force, also looks the same, although now is apparently the namesake brain of the "Brain Area", and destroying it causes the giant alien that the game takes place in to explode, although the Vic Viper escapes before it does so.

Salamander has craters similar to the Moon and has an opening that leads to the planet's core and an escape route.

The iconic background theme generally heard in this stage is "Destroy Them All", composed by Konami Kukeiha Club.

The planet appears in Vol.1 as the main planet. 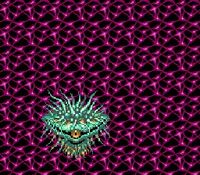 Retrieved from "https://gradius.fandom.com/wiki/Salamander_Planetoid?oldid=30165"
Community content is available under CC-BY-SA unless otherwise noted.