Salamander HD Remaster is a remake of the NES version of Life Force for Android devices, which features new HD graphics and use touch controls. The game was being developed by Konami Shanghai, but with the studio's closure the game was ultimately canceled. One of the developers working on the title finished the game and posted it as a free download on his Twitter account.

Besides the HD graphics, the main noticeable addition to this game is the option to choose between three different ships (Galaxy, Purple Emperor and Red Devil, all piloted by unnamed pilots), each with its own arsenal and special abilities. The gameplay is very similar to the NES title, although adapted to the touch controls. New to this version is the "Nirvana" attack, which is a powerful attack which comes in limited supply and is unique to each of the three ships.

This version also features a shop, where the player is able to spend in-game currency obtained during gameplay to buy new parts to enhance the ships. Ships were also supposed to be unlocked with credits, but come unlocked from the start. 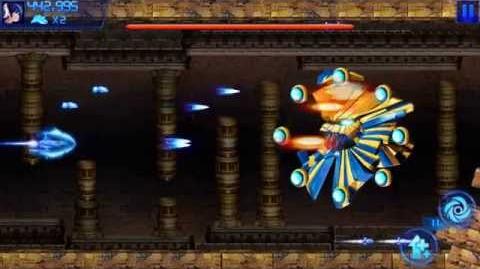 Android FC沙羅曼蛇Salamander HD Remaster？完全版一週目全プロセス
Add a photo to this gallery

Retrieved from "https://gradius.fandom.com/wiki/Salamander_HD_Remaster?oldid=24993"
Community content is available under CC-BY-SA unless otherwise noted.