Salamander 2 (サラマンダ2?) is a scrolling shooter arcade game developed by Konami in 1996. The game is a direct sequel to 1986's Salamander and is part of the long-running Gradius series.

The game is notable as it is the first in the Gradius series to incorporate three-dimensional graphic elements into its base of 2D graphics. It retains all the characteristic elements of its predecessor; two-player simultaneous gameplay, similar enemy and bosses, and inclusion of vertically-scrolling levels.

The subspace life form "Doom" began it's invasion. His appearance caused distortions in outer space, with various star systems pioneered by mankind coming into the subspace. Those who barely escaped started fighting back, with their mother planet Gradius as the last base.

Like the original Salamander, and as opposed to the Life Force releases, Salamander 2 abandons the selection-bar based power-up system, in favor of a simplified system that focuses on powering weapons up based on specific icons. For example, the player cannot increase his ship speed until a speed icon is picked up; additional speed icons further increase the ship's velocity. Several weapons, when additionally upgraded, turn into a 'super' weapon for approximately ten seconds. If the player has the ripple laser, and then gets another icon for it, the player will receive the high-powered Buster ripple for a short period of time. Options have been slightly changed with the arrival of 'option seeds', which are small options that orbit the ship firing only the basic initial shot. Two option seeds can combine into one full option. Moreover, options can also be sacrificed to utilize a short-term homing beam weapon, which will leave behind an option seed.

Several enemy bosses typical to Gradius games return, including the Golem (the first level sub boss) and the Tetran/Tenny Rop (the fourth level boss). There are a total of six levels. Since the game is similar to its prequel, Salamander 2 does not use the Revival Start feature from Gradius (which pushes the player back to a predetermined checkpoint if a life is lost), many people consider this title to be easier than other titles in the Gradius series due to this. Once the game has been completed, it starts its second-loop at a much higher difficulty. The music is also changed to remixed versions of Salamander's music in some stages. The first player's ship is called Vic Viper while the second player's ship is Super Cobra.

Salamander 2 was not made available as an individual port, but was released to the Sega Saturn and Sony PlayStation as a part of the Salamander Deluxe Pack Plus compilation, alongside the original Japanese arcade releases of Salamander and Life Force. This pack also includes Life Force 2 as unlockable mode of Salamander 2. This mode is based on the non-Japanese versions of the game, which had higher difficulty with its power-up method unchanged.

On January 25, 2007 in Japan, the game was released as part of the Salamander Portable compilation for the PSP, alongside Salamander, Life Force, the Japanese version of Xexex and a remake of Nemesis 2 (previously remade for the X68000 as Nemesis '90) featuring options to play the game with updated graphics. 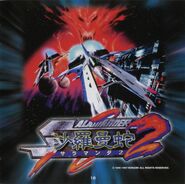 Key art (Salamander Deluxe Pack)
Add a photo to this gallery
Retrieved from "https://gradius.fandom.com/wiki/Salamander_2?oldid=24474"
Community content is available under CC-BY-SA unless otherwise noted.