Gradius Wiki
Register
Don't have an account?
Sign In
Advertisement
in: Enemies, Music references, Gradius I enemies,
and 9 more

Rush (ラッシュ, Rasshu?) is a recurring enemy in the Gradius series.

Flying drones which were first introduced in Gradius. They only come from Hatches. An upgraded version, named Rush MK II, was introduced in Salamander.

Rushes will come out of Hatches and go up until they are lined up with the player and go towards the player in one direction. 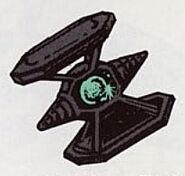