Rolling Core (ローリングコア, Rōringu Koa?) is a recurring boss in the Gradius series.

The Rolling Core has two parts that act semi-independent and also has regenerating weapons.

Rolling Core has several attacks that can take the player by surprise if they're not careful. The outer part will aim at the player and fire up to 8 slow lasers. The inner part will shoot up to four slow lasers, turn on it's side and fire a big laser, or turn backwards and release a swarm of semi-homing missiles. Occasionally, it will spin around and attempt to ram the player. Also, sometimes it will lock the guns to aim left and move up and down shooting lasers randomly. The guns can be destroyed but they will regenerate after a short time.

The Gradius V version does not release homing missiles and is slightly slower. It can also fire a large laser out of its center. After a while, it will rotate around and charge in the player direction.

While the Rolling Core fires it laser, you can shoot straight at its core (without destroying the barriers) to damage it. 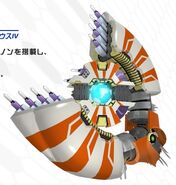