Reckless (レックレス, Rekkuresu?) is the stage 4 boss of the Game Boy version of Nemesis.

A large core situated in a towering base. Reckless' tower moves up and down, all the while destructible missiles are being shot out of the ground. While this is happening, the six orbs moving on the tower are firing normal shots as well. However, these orbs can be destroyed and do not replenish. The core itself is quite vulnerable, taking only a few shots with a laser to dispatch. 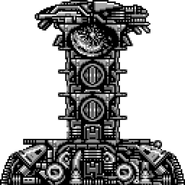 Retrieved from "https://gradius.fandom.com/wiki/Reckless?oldid=27605"
Community content is available under CC-BY-SA unless otherwise noted.