Nemesis 3
The Queensrÿche (クイーンズライチ, Kuīnzuraichi?) is the boss of stage 10 in Nemesis 3.

Queensrÿche is the only boss in Nemesis 3 to have multiple cores and forms. It requires any person playing the game to use the Back beam to destroy it. It's also possible to utilize the Multiples without Back beam if you are using the SHADOW-type option and at maximum speed.

The front of the Queensrÿche will simply move up and down, occasionally shooting a huge beam. It will continue doing this until it is destroyed. However, be warned that its core shields will release bullets.

Queensrÿche will start moving around the screen, almost unavoidably. The Vixen must enter its back, but the turrets there are only destroyable with a Back beam. If the turrets are destroyed, the Queensrÿche is defenseless except for attempting to crush the player. 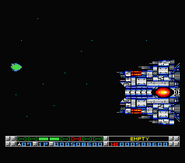 The front of the Queensrÿche 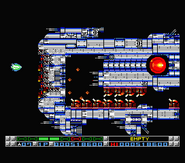