Irene is the princess from the planet E-Square, acting as a damsel in distress. She has been captured by the villain Klaus Pachel Bell, who tortures her in the game's cutscenes. In the game's ending, the Flintlock rescues Irene and sends her back to her planet inside the Flint.

She is voiced by Sumi Shimamoto. 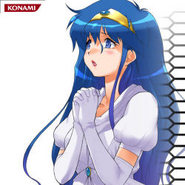 Irene in Otomedius
Add a photo to this gallery
Retrieved from "https://gradius.fandom.com/wiki/Princess_Irene?oldid=26490"
Community content is available under CC-BY-SA unless otherwise noted.