Parodius
Popolon (ポポロン, Poporon?) is the hero from the Knightmare series, appearing as a playable character in Parodius. Unfortunately, he hasn't been featured in any of the sequels.

A knight from ancient Greece, Popolon is a true hero, having defeated the evil Hudnos and the wizard Galious. He rescued and married Aphrodite the goddess of love, and now lends his strength to help Tako fight the forces of the Bug who's eating everyone's dreams.

Popolon and Aphrodite in The Maze of Galious 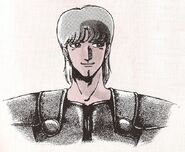