Pooyan is the boss of Stage 8 in Parodius Da! Arcade and SNES, and the Stage 6 boss of the NES version. He is not in the GameBoy or PC-Engine versions of Parodius Da!

He is a giant puffer fish and a parody of the Covered Core from Gradius II.

Pooyan moves around trying to ram you at first, but after you shoot him he backs up. He shoots a LOT of spikes that come out around his body.

On the Famicom version, he doesn't take up much of the screen.

Move up and down so Pooyan doesn't ram you. When he releases the spikes, get in front of the mouth and shoot away. Back up when necessary. However, if a spike comes out of his mouth, hang near the back. More risky, but safe. 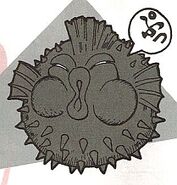 Artwork from the X68000 version
Add a photo to this gallery

Retrieved from "https://gradius.fandom.com/wiki/Pooyan?oldid=27836"
Community content is available under CC-BY-SA unless otherwise noted.