Poini is a cherish and surprisingly young Gradian with an equally surprising intelligence and a talented IQ. Like Esmeralda, she's a reference to Gradius Gaiden, piloting Jade Knight's partner ship, Falchion β. Also like Esmeralda, Poini is in Diol's class at St. Gradius, as a third year student in spite of her age.

Poini's Auto-Aim weapon has been downgraded to just being a normal Double that aims its angled shot when moving. The Gravity Bullet is still quite powerful (and has received a boost post-balance patch) and can destroy Cores in seconds. Her Rolling Options allows the player a wider range of fire, but still not as wide as is seen from Arnval's Formation Options and Tita's riding core Wide Options. Poini's Platonic Break is Gravity Eraser, and it can kill most bosses in just seconds when positioned correctly; this is probably the strongest charged shot in the game, it's probably based from the Black Hole Bomb in Darius Gaiden. 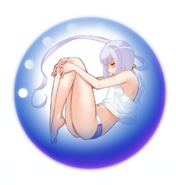 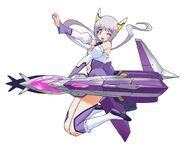 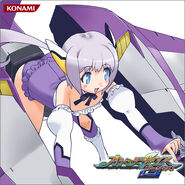 Retrieved from "https://gradius.fandom.com/wiki/Poini_Coon?oldid=26456"
Community content is available under CC-BY-SA unless otherwise noted.