For other uses, see Bacterian (disambiguation). 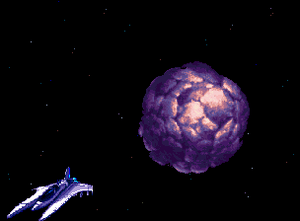 The outer layer of Bacterian is made of rock. It has craters all around the planet with hatches inside the craters that send out Bacterian ships. The middle layer of Bacterian is completely mechanical; It has smaller hatches, Ducker robots, moving ceilings and floors, mini spider-walkers, a gunwall, and a normal sized spider walker. The core of Bacterian is organic with regenerating walls, floating brains, and organic turrets as the planet's final defense. The inner core contains the nucleus, surrounded by faces, and an mechanical escape route should the nucleus be destroyed.

Retrieved from "https://gradius.fandom.com/wiki/Planet_Bacterian?oldid=29523"
Community content is available under CC-BY-SA unless otherwise noted.