He is a giant sumo-wrestler pig, similar to the Butanishikis which appear on the same stage. His weak point is the glowing button on his chest.

Pig Tide will raise his foot and then stomp the ground, causing objects to fall onto the player. He will keep repeating this move, eventually unwrapping the mawashi on his waist and using it to whip the player, while covering his crotch with a large medallion.

After he is defeated, he will explode, causing the Konami sign to fall off out of the screen. 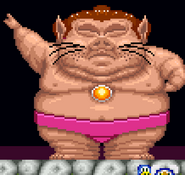 In-game sprite
Add a photo to this gallery
Retrieved from "https://gradius.fandom.com/wiki/Pig_Tide?oldid=28232"
Community content is available under CC-BY-SA unless otherwise noted.