This article is about the boss. For the lesser enemy, see Phoenix (enemy).

The Phoenix (フェニックス, Fenikkusu?) is a boss in the Gradius series.

As its namesake suggests, the Phoenix is a large space bird made entirely out of fire. It is presumably a larger version of the Fire Bird enemies from Salamander. The Phoenix appears as the first boss in Gradius II and in Nemesis 3, where it is known as Geezer Butler.

In all versions, its weak spot is the head.

The Phoenix has the same general attack patterns in all versions of the games it appears in, although its movement tends to differ between ports. In the original arcade version of Gradius II, it warps around the screen, meaning the only safe area is toward the back. The player must time their attacks between warps and get back to a safe area. In the NES version, it actually moves between positions, making the fight slightly easier.

The Phoenix will fire a large volley of lasers from its wings, followed by a heavy volley of fireballs from its beak. The fireballs can be destroyed quite easily by staying near the mouth, but the lasers must be avoided.

It's usually dead by the time it has finished its second attack. In the PC Engine version, however, it has more health and thus will accomplish more.

The Phoenix appear in the final episode of the anime as the ultimate enemy the heroes face, being born from the fusion of both Paula and Gofer. 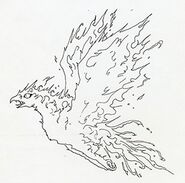 Phoenix in the Salamander anime