Pentaro X is a giant robotic penguin which appears in the special stage of Gokujō Parodius! It also appears in Paro Wars. 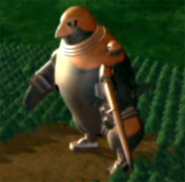 Pentaro X in Paro Wars
Add a photo to this gallery

Retrieved from "https://gradius.fandom.com/wiki/Pentaro_X?oldid=27518"
Community content is available under CC-BY-SA unless otherwise noted.