Pentaro (ペン太郎, ペンタロウ, Pentarō?) is a video game character created by Konami, originally appearing in 1990 in the game Parodius Da! ~Shinwa kara Owarai e~. A male penguin, he is the son of the penguin referred to as just "Penguin" (ペンギン, Pengin?), later named Penta (ペン太?) who originally appeared in 1983 in Antarctic Adventure, but subsequently became the protagonist of Penguin Adventure and Yume Penguin Monogatari ("Penguin Dream Story"), and a playable character in Parodius for the MSX.

Pentaro's name is a portmanteau of "penguin" and "tarō", which is a very common boys' name often used in Japanese folk tales.

Pentaro has made most of his appearances in the Parodius series of games, where he was a selectable character in every title from Parodius Da! ~Shinwa kara Owarai e~ onward, with the exception of Sexy Parodius. In that title, he plays the role of a boss at the mercenary company where all the Parodius characters are employed. He handles the negotiations and gives out the assignments to the other characters. He works in an office, specifically at a desk that he can barely see across, where he utilizes a typewriter constantly. As Pentaro cannot fight himself in this game, he hires Ivan and Toby, two penguin commandos, to take his place.

Pentaro's feathers are always blue. Later on, as pictured in the cartoon drawings of the Parodius games, he wears a flak jacket and wields a carbine. It's possible that he picked up the shooting skills learned by his father during the course of events in Penguin Adventure, as one of the most facilitating items during the course of the game is a gun.

Pentaro acquired a mate in the Parodius series; a female penguin named Hanako (which means "little flower"). Hanako is a common Japanese girl's name. She's similarly colored as Penko (Pentaro's mother), although her feathers are closer to magenta than pink, and in some games appear orange. It's unknown if Pentaro has any children, although one could conjecture that the Options he uses in the Parodius games, pictured as small penguins, are in fact his offspring. 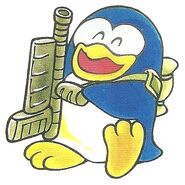 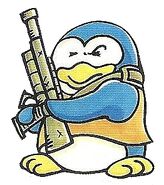 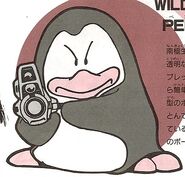 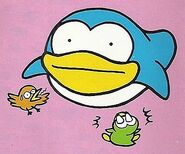 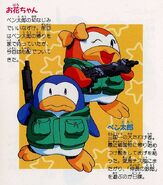 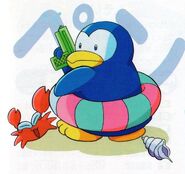 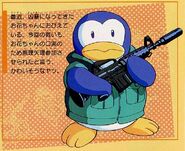 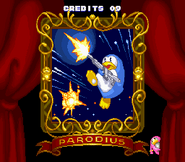 Retrieved from "https://gradius.fandom.com/wiki/Pentaro?oldid=33048"
Community content is available under CC-BY-SA unless otherwise noted.