Penta (ペン太, Penta?) is the protagonist of the Antarctic Adventure series, appearing as a playable character in the original Parodius. On subsequent games he is replaced by his son Pentaro.

Penta originally had no occupation, as in Antarctic Adventure he was marooned on the southern most continent, and having lost contact with his family, was trying to return home. In Penguin Adventure, he was charged with the task of traveling through the "dream continent" to find the golden apple which would cure the disease that Penguin Princess Penguette (Penko in Japan), Penguin's girlfriend and Pentarou's mother, had come down with. On the original Parodius, Penta helps Tako on his journey to defeat Bug, wanting to impress Penko.

In Yume Penguin Monogatari, Penta has grown severely obese, to the point that his girlfriend Penko is dumping him for another penguin named Ginji. The game followed the struggle of Penta losing weight by finding various diet drinks and exercising. However Ginji was determined to keep Penko and so he sent enemies after Penta to force feed him. At the conclusion of the game Penko reveals herself to be overweight to the now-fit Penta. Penta slaps his own head in disbelief.

Penta is known to have had one girlfriend/mate, Penguette (Penko-Hime, ペン子姫) as a result of the journey he faced in Penguin Adventure, who is the mother of Pentarou. In the manual for Parodius on the MSX, it states that Penguin has earned many female fans from his appearances in PC games, causing Penko (here labeled as Penko-chan) to be jealous. In addition, his duties with the Space Fighters had made him uncomfortable in his relationship with Penko. 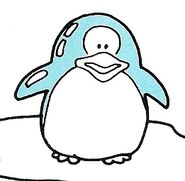 Penta in Castlevania: Grimoire of Souls 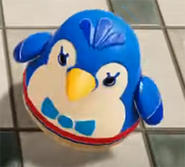 Penta in Frogger in Toy Town