Pastel is the deuteragonist of the TwinBee series. Pastel is Light's cousin and the pilot of WinBee. By all accounts, she's a bright and active girl. Like Light, she appears most often in cutscenes, from which it would seem that she spends most her time on the beach. While on duty, she wears a pink and white costume with a large 'W' logo.

Pastel makes a cameo appearance in the third downloadable stage, The Reunion, flying over Donburi Island piloting WinBee. However, WinBee takes a bad bump from running through a metal girder, causing its programming to malfunction and turn against the Angel pilots. Pastel pleads WinBee to stop while she battles the player, but when WinBee takes enough damage she reverts to her original programming and flies away with Pastel unharmed. 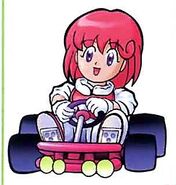 Pastel in Konami Krazy Racers
Add a photo to this gallery
﻿

Retrieved from "https://gradius.fandom.com/wiki/Pastel?oldid=26422"
Community content is available under CC-BY-SA unless otherwise noted.