This game is known in some regions simply as "Parodius". For the first game in the franchise, see Parodius.

Parodius Da! ~Shinwa kara Owarai e~ (パロディウスだ! －神話からお笑いへ－?, lit. "It's Parodius! ~From Myth to Laughter~") is a shoot'em up arcade game and is the second title in the Parodius series produced by Konami. The gameplay is stylistically very similar to the Gradius series, but the graphics and music are intentionally absurd.

This game is often mistaken as the original game of the series. The lesser known original game, Parodius, appeared on the MSX computer (in Japan only).

The year is 1992. Not much time left in the 20th Century, and all over the world people have lost their hopes and dreams. Government officials only care about getting rich themselves. Children now love their computers more than their own mothers. Even though young people sense the imminent destruction of the human population, they bury their minds in the thrills of the game center. But the root of all the evil is too horrible to speak of, for it lies in the gopher-faced, headbanded, Great Octopus.

One day, our octopus friend gets into a fight to the death with his old rival, the Bug. Our octopus wins and people start to call him Mr. Parodius. On his paid vacation, he goes to the countryside to enjoy a little farming. Returning to our ready-made octopus pot, he reads the "Universe" newspaper and nearly falls off his chopping board on surprise.

There's a picture of the mysterious Great Octopus with the Earth in his arms. "F...father?", he stutters. It was his father, who had disappeared just two years before, never to return home. His old friends, who had seen the paper, rushed over.

"Vic Viper"... Retired after the war on Dimension Three's G-World. Runs a home for the retired. Age: 58.

"Pentarō"... His hobby is playing with air guns. The child of penta and Penko. Age: 9.

"TwinBee"... One twin from the set. Has a cute face and is a formidable foe, able to destroy enemies easily. Age: 17.

How strong can a gang of this size be? They're lots of fun, but can't be relied on. Whatever happens is not their fault. So Octopus sets out on a search for the truth and with his companions begins to travel the world!

As stated above, gameplay is very similar to the Gradius series, with a few differences. Parodius Da! retains the ability to select of different weapons configurations but implements via four different characters: Vic Viper (from Gradius), Octopus, Twin Bee, and Pentarō. The second main difference is the addition of bell power-ups, from the TwinBee series. These bells act as one-time power-ups, allowing you to destroy every enemy on screen, fire huge beams of energy, etc. Enemies and environments from the Gradius games and TwinBee are mixed in along, with a host of anime-style opponents, which include scantily-clad women. All of the Gradius elements are integrated in a very light-hearted fashion. For example, the Big Core, a regular boss within the Gradius series, is given a neon-look and is called "Viva Core". Moreover, there is a moai (Easter Island head statues) level, but all of the statues are given a much more animated look. The boss of that level, the Moai Head, fires other moai at the player by spitting them out of her mouth. The final boss, in typical Gradius fashion, is an unarmed enemy that once defeated, results in a destruction/escape sequence.

The missile will fall to the ground, and then move along until it encounters an enemy. The Double mode will fire two blasts, one forward, and one incline forty-five degrees above. The Laser mode is a thin blue laser, identical from Gradius.

This configuration is identical to the weapons presented in the Salamander arcade game. The missile is '2-way' that yields two bomb-like explosives that fall both up and down. The Double is the tail gun present in the second configuration. And the laser is the ripple laser, which fires expanding concentric circles at the front of the craft/person.

This set is the weapons from the vertically-scrolling TwinBee, applied to horizontal gameplay. The missile is now the rocket punch, which has a larger impact area than the standard missile. The double is the same tail gun from the Octopus/Salamander configuration. The laser is a 3-way gun which fires shots the same size as the Double and standard weapons.

This set mostly the weapons available in one of the configurations in Gradius III. The missile is the photon torpedo (spelled here Poton) that fires one missile that travels along the bottom ground and penetrates multiple enemies. The Double mode will fire two blasts, one forward, and one incline forty-five degrees above. The laser mode is a spread gun, which fires a small circle that gradually spreads concentrically outward.

Parodius Da! has been ported to a number of platforms, most notably the Super Famicom (one of the two console ports of the game released in Europe) and the PC Engine. The game was also ported on the Famicom (the other console port released in Europe, released by "Palcom Games") with several stages omitted but with a new amusement park stage as well as several hidden bonus stages. Most recently the game, along with several other Gradius titles, has been ported to Java-based cell phones in Japan.

The Game Boy version (which was also released in Europe) shows the ages of the playable characters, and only has 8 stages, which include stages 1–6, and 10 from the arcade game. Stage 3 was replaced with a different one. Game Boy version of stage 3 also has a hidden stage. This version was also re-released in color as part of the Konami GB Collection Vol. 2.

The PC Engine version does not have the arcade Stages 5 and 8, but features a stage titled SPECIAL and a new introduction that features several strange-looking Japanese characters. This is in contrast to the arcade intro, which chronicles the Gradius legacy up until the time of release.

The SNES version added the bath house and OMAKE stages over the arcade version. In the OMAKE stage, the player immediately continues after dying, instead of at a checkpoint. The European version of the SNES port was titled Parodius Non-Sense Fantasy. 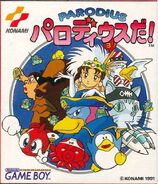 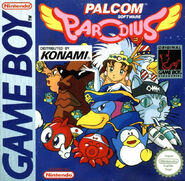 Game Boy cover (EU)
Add a photo to this gallery

Retrieved from "https://gradius.fandom.com/wiki/Parodius_Da!_%7EShinwa_kara_Owarai_e%7E?oldid=27433"
Community content is available under CC-BY-SA unless otherwise noted.