Nobil (ノービル, Nōbiru?) is the second boss in Gradius Gaiden.

Nobil is the easiest of Gradius Gaiden's Stage 2 bosses. It is fought by taking the lower path of the stage. It is a small core warship that seems to be possessed by Zelos. It has one barrier and a purple core.

Nobil starts off using its four tentacles to grab trash and seal itself with it. The trash can be destroyed with minimal effort, but Nobil likes to grab A LOT of trash. After it's done armoring himself, it charges a six way white and pink laser (2 lasers in front 1 laser top-right one laser at the top one laser down-right one laser down) top and ejects all the trash on it.

After the six-way laser, the player should have blown its only barrier off. By this time, it'll start grabbing trash again, but it also tries to punch the player when its tentacles have a hint of red electricity. By now, it should be almost dead, so the player should show no mercy. Its only barrier has a medium amount of health, and its core has a slightly larger amount. When it dies, it explodes, but as he explodes, Zelos brievly could be seen, hinting that Nobil was just junk pulled together into a core by Zelos. 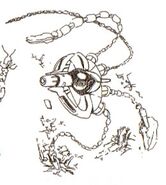 Concept art
Add a photo to this gallery

Retrieved from "https://gradius.fandom.com/wiki/Nobil?oldid=31016"
Community content is available under CC-BY-SA unless otherwise noted.