For the flying cat, see Mike.

Michael (ミカエル, Mikaeru?) and Gabriel (ガブリエル, Gaburieru?) are recurring characters in the Parodius series. They are two angelic pigs that are always ready for battle.

Michael and Gabriel are two angelic pigs named after two Christian archangels. They're loosely based on the angel pig enemies appearing in Parodius Da! Michael's latest appearance was a cameo in the Parodius Pachislot game, Gokuraku Parodius! Their weapon set is based on that used by the Silver Hawk in the Darius series, and to the lesser extent Fire LEO-03 "Styx" in Thunder Force III.

Unlike most characters, they simply Power Up, which renders them immune from Option Hunters.

Michael and Gabriel in Gokujō Parodius!. 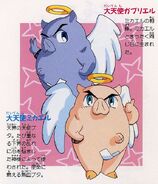 Michael and Gabriel in Gokujō Parodius!.

Pastel transformed as Michael in TwinBee PARADISE in Donburi Shima.