The Metalion (メタリオン, Metarion?) is the player's ship in Nemesis 2.

In preparation for the imminent Bacterian invasion, its development was promoted following the super spatiotemporal fighter Vic Viper. It was developed by Dr. Venom, who was Director General of the Space Science Agency under the direction of Emperor Lars. Its first test flight was done in 6665 from Nerba Base No. 12, were the Hyperdrive System 11 was proven to be unstable.

As Venom et al. were exiled after a coup attempt, the final adjustments of the psychic/Wreek power propulsion device were left for the engineers of the Space Agency, but advanced as expected and the ship was completed by the time of Venom's invasion.

In addition to the extra weapons, there are special powerups that grant the Metalion extra abilities for a limited time. They are: 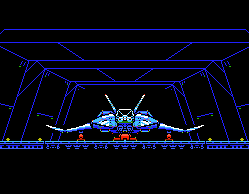