Metal Slave (メタルスレイブ, Metaru Sureibu?) is one of the final bosses in in the MSX port of Salamander. It later reappeared in Otomedius Excellent.

Metal Slave is second of the two final bosses in the MSX port of Salamander, being one of the few bosses exclusive to that game. It has five cores and can be destroyed if its middle core is destroyed.

It's similar to Dead End, another boss that has multiple cores, although in a harder version.

In Otomedius Excellent, you are now required to destroy all five cores and the middle core doesn't affect the warship anymore. To compensate this, the hatch is now vulnerable to your attacks along with the laser turrets. Players should advise that in case the Metal Slave is severely incapacitated, it will shoot Flying Cores that bounces back at the edge of the screen. 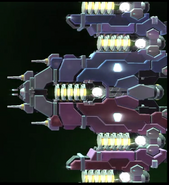