The Mayhem Warship (メイヘム艦, Meihemu Kan?) is a recurring boss in the Gradius series.

The Mayhem Warship is the boss of stages 4, 5, 9, and 10 of Nemesis 2 and stage 4 in the X68000 remake. A miniaturized version, Bug-Mayhem, acts as the boss to the second Bonus Stage in Parodius.

The boss will move up and down and occasionally fire two lightning bolts that aim at you. In the X68000 version the bolts fire much faster and are bigger. The core armor can be hard to hit due to the guns in front. As with all X68000 version bosses, be careful of the shrapnel bullets after shooting the core armor. It will also try to ram you occasionally.

The Parodius version keeps the same attacks as the MSX version. In that game, the entire ship is vulnerable. 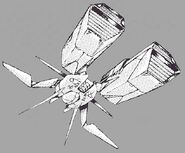 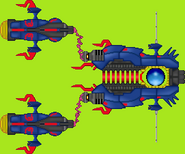