Mambo and Samba are two goofy looking Ocean sunfishes, they are based from Konami's obscure MSX2 shooter Space Manbow. They are named after the music styles of the same names, as to pun the design of the "Space Manbow" ship (since it looks like a mambo fish). Their weapon sets parody those used in the R-Type series, but the weapons are also implemented with functions from Xexex.

In Paro Wars, Mambo makes a cameo appearance in the like House.

Choosing a weapon type adds an option that fires said weapon. It is possible for Mambo or Samba to control options that are firing different weapons.

Mambo and Samba in Gokujou Parodius 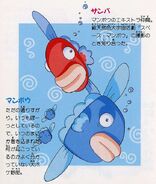 Mambo and Samba in Gokujou Parodius
Add a photo to this gallery
Retrieved from "https://gradius.fandom.com/wiki/Mambo_and_Samba?oldid=33056"
Community content is available under CC-BY-SA unless otherwise noted.