Madoka (マドカ, Madoka?) is one of the main characters in the Otomedius series and she is based on Madoka from the TwinBee series.

An immigrant from Planet Mel, Madoka is an engineering genius who built her own Riding Viper, the Murdoch Viper, from scratch but inspired from her grandfather, Dr. Mardock. She enjoys baking and other domestic activities. On Earth, she's a first-year high school student along with her fellow teammate, Tita Nium.

She is voiced by Sawa Ishige.

Madoka has upgraded her Riding Viper, which is now the Murdoch Viper Mk II. She is a character suited for more advanced players mainly because her default laser weapon, the Vulcan, can be hard to focus on an enemy core and her Bee-Units (Twinbee, Winbee, and Gwinbee) will aim at the nearest enemy and not at where you want them to shoot. She also does not have a weapon that can shoot above or below you. Her Platonic Break summons Shooting Star, a legendary fighter ship from her planet, which fires its lasers and missiles as it goes. 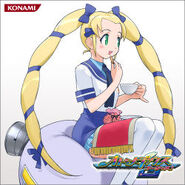 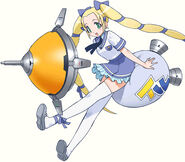 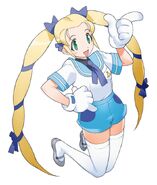 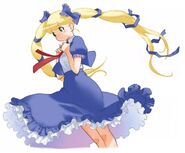 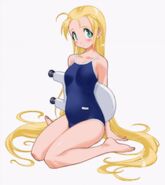 Retrieved from "https://gradius.fandom.com/wiki/Madoka?oldid=27565"
Community content is available under CC-BY-SA unless otherwise noted.