Mad Skin is a large eye-like organic monstrosity that is embedded inside a wall made of strips of raw flesh and skin. It looks similar to the Big Eye, but without arms.

Mad Skin attacks by randomly firing one to three bouncing cells which burst into turrets on impact with the ground, all the while firing thin laser beams. As he takes damage, the eye turns purple and then red. When he dies, he gurgles, stretches out, and then abruptly disappears. 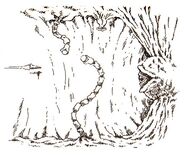