Lord British (ロードブリティッシュ, Rōdo Buritisshu?), also known as Lord. B or Road British (the latter as a result of romanization), is a recurring spaceship fighter appearing in the Gradius series. It made its debut in the arcade version of Salamander (1986), acting as the designed fighter ship for Player 2. It features red streaks instead of characteristic blue ones from Vic Viper, and it's in the shape of a jet.

Somewhere away from planet Gradius, another benevolent planet called Latis was at a state of beauty with sparkling blue oceans. However, for years an ancient prophecy spelling potential doom has haunted its inhabitants: that light-years away, a giant dragon born from the sea of flames (an unnamed star) would consume the planet into eternal darkness.

This prophecy seemingly came true when the Bacterian Empire, under the guise of the Salamander Army, invaded the planet and overwhelmed the Latis Army. Unwilling to face defeat, the prince of Latis took charge of the fight and flew the starfighter Lord British straight into the heart of the enemy's mother star alongside the Gradius Empire's Vic Viper.

Both ships tracked down and destroyed numerous enemy commanders, including the Brain Golem, Tetran and Death, before locating and destroying the Zelos Force. In doing so, both the Vic Viper and Lord British saved planet Latis from an impending doom and drove the Bacterians away.

Years later, Lord British, alongside the Vic Viper, the Jade Knight and the Falchion Beta, were summoned to destroy an unknown enemy luring within the unknown and dangerous Black Nebula. With an updated set of weapons, Lord British and the other fighters were able to track down the source and destroy it while narrowly escaping destruction, saving Gradius in the process and bringing an end to the Bacterian Empire once more.

Since Lord British debuted in Salamander, all of the new weapons (including the Tailgun, despite not being in Salamander) in that game were instantly attributed to it (despite also being available to Vic Viper at that time and with the weapon set being used by it in later games).

In Gradius Gaiden, where Vic Viper was limited to the Standard Type 1 weapon set, Lord British gained the Disruptor, its exclusive replacement for Vic Viper's Laser (the Ripple Laser is now the Double). The Disruptor is a unique red/orange laser which shoots out in a pulse-like manner, with each beam reaching the length of the screen. Its main disadvantage is its low firing rate, as enemies may be able to sneak up on Lord British when it has finished firing the Disruptor.

As seen in the Solar Assault flyer 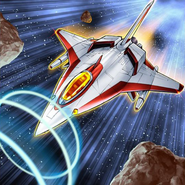