On the Event Horizon

The Kraken (クラーケン, Kurāken?) is the boss of Stage 7 in Gradius Gaiden.

The Kraken is a large core warship with two arms, four frontal barriers and another three on its back.

Kraken is somewhat unpredictable, moving its arms to fire giant lasers while firing smaller lasers as well. After a few shots, it starts using its arms to track you, firing two lasers in your general direction. When it's done doing this, it flips around (which is the only time you can hit its back barriers) and grabs a boulder from what's left of the stage to guard itself with. The boulder has minimal health and will go down easily; however, Kraken will release it if you take too long. 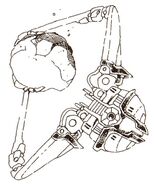 Concept art
Add a photo to this gallery
Retrieved from "https://gradius.fandom.com/wiki/Kraken?oldid=28072"
Community content is available under CC-BY-SA unless otherwise noted.