Kokoro is a first-year student of St. Gradius Academy in their high school division, but her life is somewhat dictated by a desire to follow in the footsteps of her family's lineage, where she will fight vampires and other monsters; in this, she is in a similar position to her classmate Gesshi Hanafuuma who seeks to become a demon-slaying samurai warrior here in the modern-day world. The Squadron really does not know much about Kokoro's lineage except for what has been told to them, but they become friends with Kokoro all the same right from the start.

Her Riding Viper is the Stavros, a ship resembling a wider, more open Vic Viper T-301 with a customization of Belmont Clan's cross logo and sporting a miniature Trigon drone ship.

She is voiced by Hitomi Harada.

Kokoro's initial weapon set is very tricky to use effectively, and is based from weapons seen in the Castlevania series.

The Holy Waterbis Kokoro's missile weapon which consists of an explosive bottle of holy water that is tossed out in front of the Stavros and then drops, producing a watery burst for a short time when it hits either the ground or an enemy. When this weapon is used at level 2, there is still only bottle of water tossed, but the drop speed of the bottle and the strength of the weapon is increased.

The Beam Cross is Kokoro's laser weapon. It works very similarly to the Reflex Ring double weapon, just with a longer range (and shot delay) and it is also smaller. Level 2 for this weapon comes at Virtues Lv 1, but unfortunately, the only change is an increase in both the projectile's range and its strength. Even at Level 3 there is only a single cross.

The Axe is Kokoro's double weapon, and it works just like its Castlevania incarnations with an axe projectile going in a set parabolic arc. Although it is tough to effectively use the weapon with its specific path and shot delay, the effort spent mastering it is rewarded, for the Axe does massive damage. As a piercing weapon, it is able to go through enemies and terrain. Against bosses, Axe 1 should take no more than three hits to destroy a barrier, and a core takes about four hits on average to be destroyed, but both of these statistics are boss-dependent. At Levels 2 and 3, the Axe's firing rate, strength and number of projectiles on-screen per shot increases.

The final exclusive weapon in the set is Kokoro's signature special weapon, the Beam Whip. This weapon consists of a continuous pink laser emitted by the Stavros that moves with it, leaving a trail that goes across the screen in the process. This gives the weapon rather good coverage on the screen for taking out all of the lesser, formation enemies. Such overall ease of use, however, comes with a price in that the Beam Whip has low strength, and is therefore not effective on armored enemies, barriers and bosses at its initial power. Once the weapon has its higher levels unlocked, the Beam Whip is a much more effective weapon and cheap to maintain at such levels.

Now we come to Kokoro's lone, miniature Trigon Unit for her Option. It is a unique Option which works like none that have come before it. This Trigon unit moves opposite of the player's own movement, and it will not shoot any of the weapons selected. To make up for this, it can level up, and these levels stay until the player loses a life. The Trigon unit fires a normal shot to start, a rapid white star projectile that comes out the front and back simultaneously at Level 2, and lastly, a base-level Twin Laser firing front and back at Level 3.

The last thing to mention is Kokoro's Platonic Break, the Lightning Sword. Those who have played shmups for a long time need only look at the name Trigon (or Lightning Fighters in the U.S.) to know from whence it came. Then again, that game's ship served as the inspiration for Deltatry in the boss rush of Gradius Gaiden, and the same laser attack is used by it; most of us are more likely to have seen the attack there first. 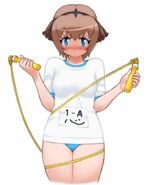 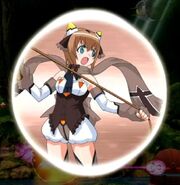 Kokoro's Profile from the Pilot Selection 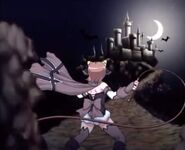 Kokoro in her swimsuit, at the beach with her fellow angels, from the game's credit roll

Kokoro in her uniform, from the game's OP.

Kokoro giving the pose of her ancestor Richter, from the game's OP.
Add a photo to this gallery

Retrieved from "https://gradius.fandom.com/wiki/Kokoro_Belmont?oldid=26484"
Community content is available under CC-BY-SA unless otherwise noted.